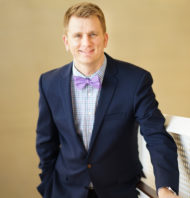 Dr. Christopher Nakielski is incredibly excited to be joining the Cougar family. “Dr. N” recently earned his D.M.A. in choral conducting and pedagogy under the tutelage of Drs. Timothy Stalter and David Puderbaugh. Prior to his enrolling at The University of Iowa, Nakielski received his B.A. from Ripon College in 2006, and his M.M.E from the VanderCook College of Music in 2009. After completing his degree at VanderCook, he directed choirs at college-preparatory school Loyola Academy in Wilmette, Ill. for six years. While at Loyola, Nakielski toured nationally and internationally, including Italy, Poland, and the Czech Republic. In 2013, his Honors Chamber Singers were invited to participate in Chicago radio station WFMT’s live broadcast of “Introductions,” a weekly program that features the Chicago area’s finest pre-college classical musicians. Later that academic year, Nakielski was awarded Teacher of the Year at Loyola Academy, the first performing-arts teacher to receive the award in the school’s 108-year history. As a tenor soloist, Nakielski has sung with several professional choral ensembles in Chicago, including The Chicago Choral Artists and the New Classic Singers, in addition to serving as a tenor section leader for Queen of All Saints Basilica and St. Peter’s in the Loop. As a rock musician (Keyboards/ backup vocals), he toured five years with singer-songwriter Ben Ripani, playing at prestigious festivals and stages across the United States. In 2010, the band’s music was featured in the 2010 Season two finale of cable television show “90210.” Nakielski is also interested in twentieth-century Polish choral music. He recently finished his dissertation involving research on the first female Polish choral conductor Irena Pfeiffer (1912–1986).