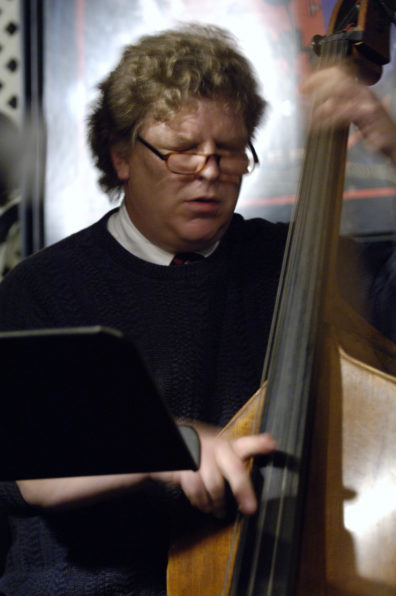 Frederick “Dave” Snider serves WSU as an instructor in MUS 262 History of Rock and Roll, jazz bass and jazz combos, as well as performing in faculty ensembles Jazz Northwest and Fatt Jazz. Dave earned the Master of Arts in music at Washington State University, Bachelor of Arts in music from San Jose State University and an AA at Monterey Peninsula Junior College. Snider also did graduate studies at Sacramento State University and at the University of Hawaii at Manoa, studying classical bass and chamber music. He has performed professionally in orchestras, concert band, and specializing in jazz bass in big bands, rock bands, funk bands and jazz combos since 1969.

Snider has served at Washington State School of Music since 2003, as a graduate teaching assistant and instructor. Snider has taught string and electric bass lessons, jazz improvisation, jazz history, jazz arranging, jazz theory, and jazz combos. MUS 262, History of Rock and Roll, has become a very popular class under his tenure. As a bass teacher he instructs students in styles ranging from Ray Brown, Charles Mingus, Scott LaFaro, to the contemporary grooves of Stanley Clark, Christian McBride and Marcus Miller. Students also work on classical technique. Over the years Snider’s bass students have won outstanding bassist awards at the Lionel Hampton Jazz Festival at the University of Idaho.

At WSU, Snider has performed in many jazz combos to include WSU faculty jazz combo, Jazz Northwest and many other jazz combos to include Fatt Jazz and Crosscurrent. He has recorded many CDs as a sideman under the YAZZ Recording label and recorded many CDs while in the US Air Force. Snider has performed locally with the Washington/Idaho Symphony. He has twice performed Stravinsky’s suite, The Soldier’s Tale (L’Histoire du Soldat) and with many other WSU faculty over the years.

Snider has a worldwide reputation as a jazz composer and arranger. His music is published by the international publishing company Jazz Lines Publications, formerly known as Walrus Music. His teachers in jazz composition include Don Schamber, Dan Haerle, Jan Spencer, Hank Levy, and Russell Garcia.

Snider has been a successful performing musician, teacher, composer/arranger, clinician, and adjudicator since 1969. From 1969 until 1978 Snider was a professional performing musician in the San Francisco Bay area, playing every type of music from rock to Bach. During that time besides playing the pop contemporary scene he played in the Monterey County Symphony under conductor Hymo Tauber and was a substitute string bassist in the San Jose Symphony under George Cleve. Snider also taught music in the Palo Alto Unified School District, 1977/78, and the San Jose Unified School District, 1976/77. Snider was a studio musician from 1973 until 1978 at Monterey, Ca recording studio, Monterey Sounds. From 1978 until 2003 Snider was a musician in the United States Air Force band program. During that time, Snider performed on string and electric bass, was a leader/director of big bands and combos, conductor of marching and ceremonial bands and staff arranger for all bands. While in the AF band, Snider performed on string and electric bass in the concert band, wind ensemble, rock band, big band, and jazz combo to name a few. Snider also recorded many CDs while in the USAF. His most notable CD was Changin’ Times for which he was leader/director of the Commanders Jazz Ensemble and arranged all the charts for the CD. Over his 24 year career, Snider has given over 1000 clinics, seminars, and master classes highlighting rock bands, big bands and jazz combos. He has done well over 15,000 performances in his 24-year Air Force band career. Snider has performed in almost every state in the union including Hawaii, as well as major cities and small towns in Europe, to include Moscow and St. Petersburg, Russia, and Eastern-bloc countries to include Czechoslovakia and Hungary, and in Morocco in North Africa, and Panama, Central America. He has performed for Presidents Carter, Reagan, Bush 1 and 2, and Clinton. Also, included are several Vice-Presidents, cabinet secretaries, and heads of state, including many high level European and Russian dignitaries. Snider has performed with dozens of prominent jazz musicians. His most memorable performance was as leader/director of the Commander’s Jazz Ensemble with the TV and movie star, Wilford Brimley, for a Veterans Day performance. He arranged 10 vocal charts for Mr. Brimley’s performance. Snider has performed with the Air Force band on Nashville Now with Ralph Emery where he shared the stage with serval famous stars to include Minnie Pearl. As a staff arranger, he has to his credit over 500 charts which have been performed all over the world. Many of his charts have been recorded for Air Force promotional material. Snider was one of the first of 80 western people to march in Moscow, Russia for Russia’s Victory Day parade at Moscow’s Red Square in 1993. Snider performed for Ronald Reagan’s inaugural re-election celebration in Athens, Greece in 1984 for over 30,000 people. In 1984 when he was stationed with the USAFE band in Ramstein Germany, he performed on string bass with the some of the original musicians from the Glenn Miller band for a 40th anniversary reunion at the Royal Albert Hall in England. Those musician’s included Ray McKinley, drummer and vocalist, Peanuts Hucko, on sax and clarinet and Tex Beneke on sax. Dave’s military career was capped with the appearance of the USAF Commanders Jazz Band at the Monterey Jazz Festival in 2002, with WSU’s Dr. Greg Yasinitsky as guest performer.

From 2003 to the present, Snider has been bringing “world class, face to face” experience to Washington State University. His composition World Class Face To Face (2006) was composed and dedicated to V. Lane Rollins, WSU president, 2000-2007 and was used on the WSU music website in the jazz area for years.

As a bassist, Snider’s experience and expertise have allowed him to perform both symphony orchestra concerts and jazz combo sets, back to back. He is uniquely qualified to assist aspiring bass students gain the skills and knowledge to have a successful career in music.