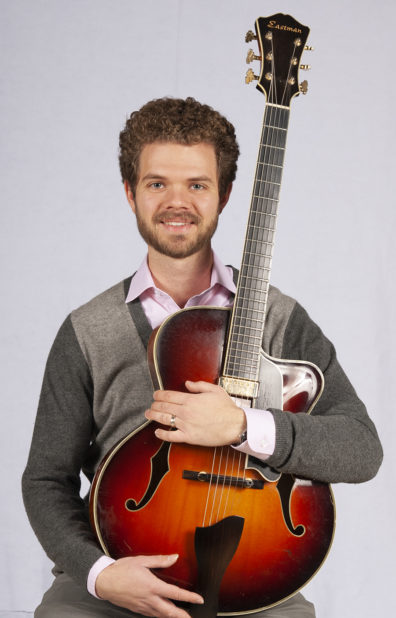 Three-time Downbeat Magazine Student Music Award winner, Gabe Condon, is a guitarist, composer, and educator based in the Pacific Northwest. Gabe is passionate about developing new and creative learning experiences for his students, and led the Songwriters Roundtable sessions on Zoom in the spring of 2020. The WSU College of Arts and Sciences and the WSU Daily Evergreen student newspaper featured the Songwriters Roundtable sessions, highlighting the novel opportunity for students to engage and share creatively amid the pandemic. Prior to his appointment at WSU, Gabe was a Lecturer of Jazz Studies at Ithaca College from 2017 – 2019. Gabe also taught at the Eastman Community Music School in Rochester, New York, and in the Dominican Republic at FEDUJAZZ and Sociedad Cultural Renovación.

In addition to teaching, he continues to compose, present, and perform nationally. Gabe’s pieces have been performed by the Rochester Chamber Music Society, the Eastman Jazz Ensemble, and the Eastman Studio Orchestra. He has arranged orchestral pieces featuring guest artists such as Jeff Coffin, Eddie Daniels, Andrés Forero, Christian Howes, and Jane Monheit. Gabe led a clinic entitled “Jazz Improvisation Using Motivic Development” at the national Jazz Education Network Conference (JEN) in 2019, and gave a research presentation on “Charlie Parker’s Influence on Hip-Hop” at the 2020 JEN Conference.

In 2014, he won first place in the Wilson Center International Guitar Competition in the Jazz Division. In 2017 and 2018, he accompanied the U.S. Presidential Scholars for performances at the Kennedy Center in Washington D.C.. He has performed at the Rochester International Jazz Festival, and in New York City at venues such as Dizzy’s Club Coca-Cola, St. Peter’s “Jazz” Church, and The Bitter End.