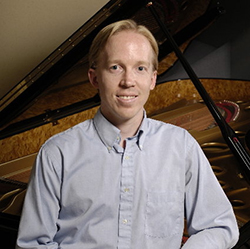 Jeffrey Savage is active as both soloist and chamber musician, having performed in such venues as Alice Tully Hall, Carnegie Hall’s Weill Hall, the Juilliard Theater, New York’s FOCUS! Festival, the Aspen Music Festival, and the Banff Keyboard Festival. His solo performances have been broadcast on public television and radio. Orchestral appearances include performances with the Shreveport and Lincoln symphonies, and orchestras in New York, Washington, Colorado, Wyoming, and Pennsylvania. Jeffrey represented The Juilliard School in performances at the Kyoto International Chamber Music Festival, and in a series of solo and chamber recitals and masterclasses throughout China. Recent performances include concerts in Singapore, New York, and Vancouver (BC). Jeffrey has also toured Southeast Asia, where he premiered new works in Thailand, Vietnam, and Malaysia. Other performances include duo piano recitals at the University of Puget Sound’s Piano Festival, and the National Federation of Music Clubs National Conventions in Orlando and Washington, D.C.

Jeffrey Savage has been recognized in national and international competitions, including the Missouri Southern International, Fort Collins, and Wideman Competitions. His piano duo 88SQUARED won first prize at the Ellis Piano Duo Competition and the Abild American Music Prize in American music. The duo gave international premieres in New York, Vancouver and Singapore of a new two-piano work by Lowell Liebermann. 88SQUARED was subsequently invited by Liebermann to record his complete two-piano works for a new CD released in the fall of 2015. The duo also received second prize and a Special Mention Prize in the Two-Piano Division of the Concours Grieg International Piano Competition in Oslo, Norway, where they performed with members of the Oslo Philharmonic.

Raised in Nebraska, Jeffrey received his undergraduate degree from the University of Colorado at Boulder, where he studied with Robert Spillman and Angela Cheng. After graduating from Colorado with highest honors, he completed graduate studies at The Juilliard School, finishing the master’s program with Martin Canin and the doctoral program with Yoheved Kaplinsky. Dedicated to teaching, Jeffrey has adjudicated and presented workshops and masterclasses in Washington, Alaska, Nevada, Idaho, and Oregon. His students have been winners of regional competitions, including the collegiate level of the MTNA Washington state competition, MusicFest Northwest Young Artist Competition and Washington Idaho Symphony’s concerto competition. His students have continued their studies at Northwestern University, the University of Washington, and Texas Christian University, among other schools. Before joining the piano faculty of Washington State University, Dr. Savage taught at Lebanon Valley College, and in both the Pre-College and College divisions at Juilliard.