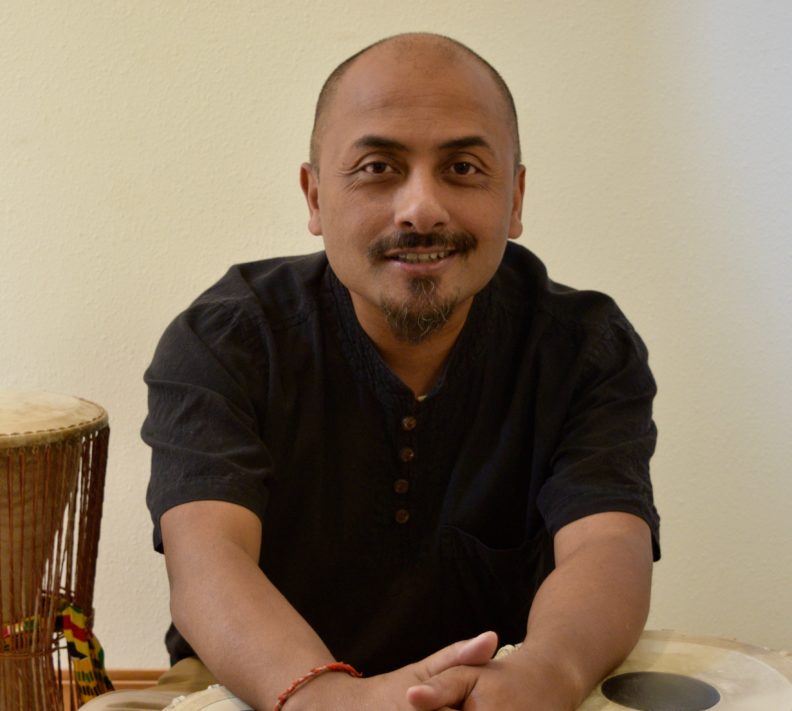 Navin Chettri is a percussionist, vocalist, composer, and educator. He is the Founder & Artistic Director
of The Kathmandu Jazz Festival (Jazzmandu) and “Drum Jatra” Percussion Festival in Nepal and the
Artistic Director of the World Music Celebration at the Lionel Hampton School of Music in the US. His
background and knowledge of music are a blend of Indian classical / Nepali folk musical traditions, Afro-
Caribbean / Brazilian rhythms and jazz.

A Hampton Scholar, Navin received his undergraduate and Master’s in percussion performance and
composition from the Lionel Hampton School of Music at the University of Idaho (UI). At UI, Navin has
also served as a professor of percussion and taught “Music & Rhythm in Global Dances” for the
Department of Movement Sciences.

Leader of the band Cadenza Collective, Chettri is considered a pioneer and a driving force behind the
growth of Jazz in Nepal. With six albums to date, the band’s latest album, Himalayan Songlines, was
released in October 2019 and is further evidence of his interest in pushing musical boundaries. With their
unique jazz, Nepali-afro-funk sound, far from popular mainstream music, their previous album Back To
the Roots was nominated in 5 categories for the 2014 Nepal Hits FM Music Awards winning the Best
Pop/Rock Composition and Best Pop/Rock Album of the Year.

As a percussionist and vocalist, Navin has studied various styles of music from West Africa, North/South
Americas, and Asia and has traveled around the world performing at prestigious venues and festivals,
including the ELB Jazz Festival in Hamburg/Germany, La Baiser Sale in Paris, ShapeShifter Lab and
Drom in NYC, New Orleans Heritage Jazz Festival (panelist), Palmer Street Jazz Festival in Australia,
Ghana National TV and numerous other venues in Asia, Europe, Africa, and the US.

His recent work with Jamie Baum, a top flutist in NYC, is featured on her CD “Bridges, released with
Sunny Side Records in 2018. Their performance at the Monterey Jazz Festival was received with great
enthusiasm from both the critics and the audience. His other collaborations with musicians in NY include
“Goonj” an eight-piece ensemble that explores elements of Nepali folk and classical music with jazz
sensibilities and “NepaMali,” a project with Swiss pianist and composer Manu Koch.

His latest projects in the making are “Tabla Forro”, a blend of Northeastern Brazilian Forro music with
North Indian tabla techniques and Brazilian rhythmic sensibilities. Another project in the works is “The
Himalayan Duo” Sitar meets Drum Set, a unique initiative incorporating jazz drums and Indian rhythmic
elements with the gorgeous sound of the sitar.

“Any band is only ever as good as its drummer and this one is surprisingly good”.
Sting, Walking on the Moon, Men’s Journal

“Chettri is a gifted chant-and-scat vocalist and a creative drummer whose foundations constantly elevate
even average performances from other players.” Mark Sabbatini, www.allabout jazz.com

“Multi-talented Navin who with Cadenza has put Nepali jazz on the map, locally and internationally”.
Neal Sellers, Jazz Chord (Australia)