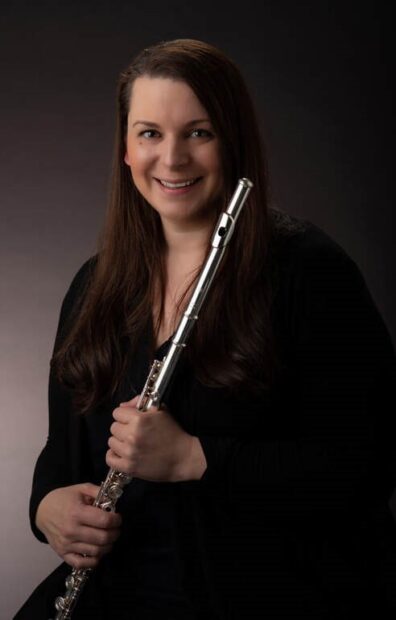 Dr. Sophia Tegart has led a varied and award-winning career as a flutist, musicologist, and clinician. A popular performer, she has been soloist with the Spokane Symphony, the Washington-Idaho Symphony, Chehalem Symphony Orchestra, and the Kansas City Civic Orchestra. As a Yamaha Performing Artist, Tegart has performed throughout the United States, Europe, and Asia. Tegart has also competed internationally, having been a finalist in the Mu Phi Epsilon International Competition and winning second place in the Music Teachers National Association Woodwind Young Artist Competition.

As an avid chamber musician, Tegart has performed at the National Flute Association Conventions, the Florida Flute Association Convention, College Music Society conferences, China ASEAN Music Week, International Conference on Women’s Work in Music in Bangor, Wales, and the Thailand International Composition Festival. Currently, Tegart is flutist in the Pan Pacific Ensemble, a wind quintet dedicated to the advancement of music by Asian and Asian-American composers. The Pan Pacific Ensemble has released two albums through Albany Records, one of which, “Feng,” was labeled one of 2019’s “Top Ten Albums of the Year” by the Daffodil Perspective. Tegart’s flute and piano duo with pianist Michael Seregow was a finalist for the 2019 American Prize in Chamber Music, and their album of works by women composers, “Palouse Songbook,” was released through Centaur Records in September 2020. Tegart also plays in the Washington State University faculty ensemble, the Solstice Wind Quintet. Together they have performed across the region with a memorable performance at the National College Music Society Conference in Vancouver, BC. Tegart also co-founded the Cherry Street Duo and has collaborated with the Portland Percussion Group. Her love of chamber music has led Tegart to arrange works for small chamber ensembles, which are currently published by Audible Intelligence Music.

Performing in the orchestral world, Tegart won positions with the Oregon Mozart Players and the Des Moines Metro Opera. Additionally, she was guest principal flutist in the Kansas City Chamber Orchestra, and performed regularly with the Kansas City Symphony, the Portland Festival Symphony, and was recently piccoloist with the Colorado Mahlerfest Orchestra. She currently performs with the Washington-Idaho Symphony and the Walla Walla Symphony on a regular basis.

A highly sought after pedagogue, Dr. Tegart regularly presents invited master classes, clinics, and lectures throughout the United States. She currently teaches at Young Musicians and Artists (YMA), and has served on the faculty of the Music For All Summer Symposium and Music in May. Additionally, she has taught at the Interharmony International Music Festival in Acqui Terme, Italy. Prior to her appointment at Washington State University, Tegart served on the faculties of Pacific University, George Fox University, Concordia University-Portland, and the University of Idaho. Since coming to WSU, she has taught numerous courses including applied flute, flute choir, chamber ensembles, History of Jazz, Women in Music, Music History: Antiquity to 1650, and a graduate seminar in Baroque music. In 2020, she was awarded the College of Arts and Sciences Early Career Achievement Award.

Tegart’s research interests include gender and music studies, nineteenth-century operatic mad scenes, and representations of art and literature in music. For her master’s thesis, “An Instrumental Voice: Use of the Flute in Lucia’s Mad Scene,” which focused on representations of madness, gender, and societal norms, she won the Mu Phi Epsilon Musicology Award. She has also presented lecture-recitals on Jessica Rudman’s Transformations, flute and bassoon duos based on the retelling of fairy tales by feminist poet Anne Sexton. Tegart has dedicated her performances and research to correcting the oversight of women composers and performers in the music world.

Sounds of the Forest by Sofia Gubaidulina