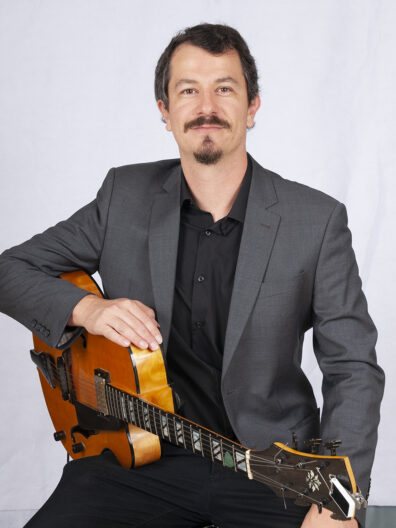 While working on his DMA in Jazz Studies at Eastman School of Music, César taught jazz guitar and jazz theory and was awarded with the Eastman School of Music Teaching Assistant Prize 2020-2021. While in Rochester, NY, César co-lead the Ibeji Quartet, a group that performed original music and arrangements of jazz and Brazilian tunes, with media appearances and performances at the main jazz venues in upstate NY, as well as in the Rochester International Jazz Festival. His original composition Mangabeu, freely inspired by rhythmic counterpoint of Central African music, was selected to be part of the Jazz at Eastman album.

While working on his master’s degree in jazz performance in the NYC metropolitan area, along with performing with renowned jazz and Latin musicians in the NYC jazz scene in well-known venues such as Club Bonafide, Le Poisson Rouge and Cornelia Street Café as a leader and as a sideman, he was part of the New Jersey City University Tenor Conclave Combo. The ensemble was selected to record a live session at the iconic WBGO radio studios in Newark, NJ, under the supervision of award-winner saxophonist Walt Weiskopf. César also participated in recording sessions with Gian Stone at Stone Recording Studios in Brooklyn, NY. Gian Stone is a Grammy nominated producer and songwriter that works with Maroon Five, Arianna Grande, The Jonas Brothers, among others.

César’s current research work is to examine harmonic techniques from 20th century composer Vincent Persichetti and apply them to jazz improvisation, composition, and arrangement on the guitar. His doctoral lecture recital presentation on this topic was nominated to the Eastman Lecture Recital Prize.

In Brazil, while working on his bachelor in classical guitar at UFRGS (one of the top universities in the country), César was awarded a research scholarship and worked in the field of music theory, co-writing a paper that was presented at the XIX ANPPOM Congress (Brazilian National Association for Music Research), Brazilian most important music research conference.
César has been performing regularly in Brazil as a leader with many appearances in newspapers, radio and TV shows, as well as a sideman, accompanying groups and singers such as Anaadi, Latin Grammy Award 2018 winner.

Click below to hear a sample of César’s work:

Have You Met Miss Jones