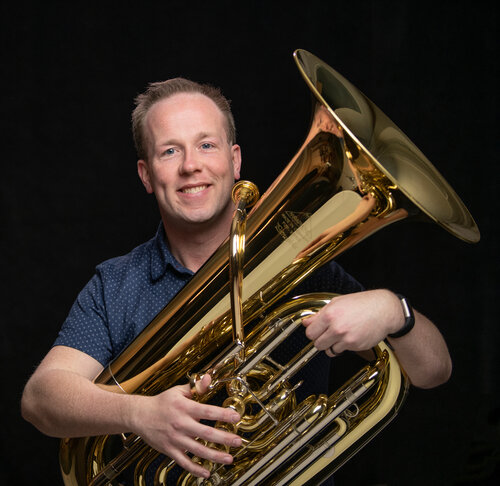 Praised for their “smooth tone and melodic flexibility” by Melinda Bargreen of The Seattle Times, Dr. Chris Dickey (they/them) has earned a reputation as a performer, teacher, and adjudicator throughout the United States, South America, and Asia. Currently, they are Assistant Professor of Tuba and Euphonium in the Washington State University School of Music. In addition to teaching graduate and undergraduate tuba-euphonium studio, they teach film music courses, coach chamber music, conduct the tuba choir, and perform in the Equinox Brass Quintet. In the summers they are on the faculty of the Red Lodge Music Festival in Red Lodge, MT.

A passionate teacher and student advocate, Dr. Dickey is incredibly proud of the hardworking students in the tuba-euphonium studio. Members have been prizewinners in regional, state, and international competitions. They regularly compete and perform at conferences of the International Tuba-Euphonium Association and Music Teachers National Association. Former students perform in military bands and orchestras. Graduates have obtained teaching positions in public schools and universities in the Northwest and other parts of the country. Other former members of the studio have gone on to earn master’s and doctoral degrees from schools around the United States. Dr. Dickey and their students co-hosted both the 2013 and 2017 Northwest Regional Tuba-Euphonium Conferences. In 2020, Dr. Dickey received the WSU President’s Distinguished Teaching Award, a system-wide award given annually to a faculty member who epitomizes the highest levels of performance and excellence and who plays a vital role in teaching WSU students. Dr. Dickey was inducted into the WSU President’s Teaching Academy. In 2021, they earned the Edward F. Mullen Memorial Teaching Award from the WSU College of Arts and Sciences, an honor given to a faculty member in the arts, humanities, or social sciences who demonstrates outstanding commitment to undergraduate education.

Dr. Dickey enjoys an active career as a soloist, chamber musician, and orchestral player. They have appeared as an invited performer around the United States, Canada, Argentina, Uruguay, Brazil, Vietnam, and China. They are the principal tuba of the Washington-Idaho and Walla Walla Symphonies in addition to performances with the Yakima, Mid-Columbia, Spokane, and Missoula Symphonies. Dr. Dickey is a founding member of the In Motus Tuba Quartet and Anonim Trio professional ensembles specializing in recording and commissioning new literature. They also perform with the Palouse Brass Company and the Crimson Brass Trio. As a Miraphone Performing Artist, each year Dr. Dickey travels to play guest artist recitals and teach master classes at high schools and universities. In 2021, they earned third place for The American Prize in Instrumental Performance.

For more information about Dr. Dickey and the WSU tuba-euphonium studio, please email them directly or visit chrisdickeytuba.com.