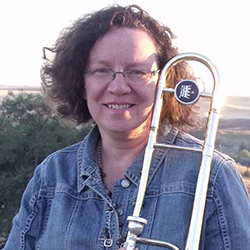 Denise Snider serves as the undergraduate advisor in the School of Music, and teaches UCORE music classes.

Ms. Snider’s musical career began in the coalfields of western Pennsylvania, where she obtained the degree of Bachelor of Science in Music Education at Clarion State College in 1983. She entered the US Air Force band career field as a trombonist, serving at Offutt AFB, Nebraska, and USAFE, Germany.  Having taken several years away from active music to raise her family, Ms. Snider returned to music  upon coming to Pullman and obtained the Master of Arts in Music from WSU in 2007.  She directs the Community Band of the Palouse, serves as an organist in local churches, and plays trombone in local musical organizations.   Ms. Snider served as an instructor at Spokane Falls Community College before starting at WSU in 2012.

Ms. Snider has been a part of the WSU community as a student, parent, and faculty member.  She is proud that there are 5 WSU degree-holders in her family.  The variety of her life experience has proven valuable in guiding students through their collegiate endeavors.  Having lived in and travelled throughout Europe, the continental US to include the deep South and Midwest, California and Hawaii, Ms. Snider’s experiences in a variety of cultural and social settings allow her to engage positively with the diversity of the students she serves.

Ms. Snider has many interests and achievements outside of music, not the least of which is having obtained a first-degree black belt in karate, which started as a result of going to karate with her own children.  She is interested in the role of music in brain health and personal wellness, especially for adults, and promotes of the value of singing, dancing, playing an instrument for all age groups.  She is also interested in the Gebrauchsmusik of Paul Hindemith, and his vision of the value of the amateur music community.

Ms. Snider reflects gratefully on the role of the teachers and mentors who encouraged the development of her career.  She hopes she can help students realize the great rewards higher education can bring to their lives.