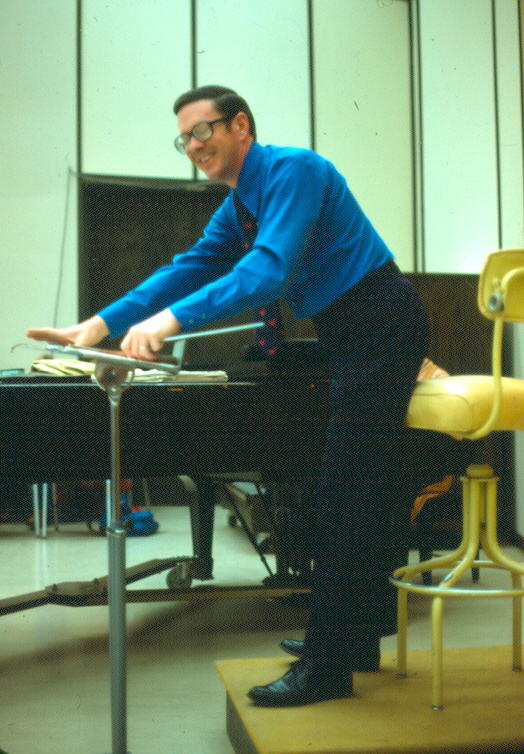 Prior to joining the WSU faculty in 1961, Dr. Green spent several years performing many major choral works under the batons of such noted conductors as Charles Munch, Erich Leinsdorf, Leonard Bernstein, Robert Shaw and Roger Wagner.

During his thirty years as conductor of the WSU Concert Choir, the choral program at WSU was noted for the breadth of its activities which included, besides numerous appearances before professional organizations as well as annual tours, an unprecedented series of performances with the Spokane Symphony Orchestra beginning in 1965 with Verdi’s La Traviata and concluding with Beethoven’s Ninth Symphony in 1988.  Included were performances of Stravinsky’s Symphony of Psalms (1970), Leonard Bernstein’s theatre piece Mass (1976) and Symphony #8 by Gustav Mahler (1978).  Other major works with the Spokane Symphony included Mendelssohn’s oratorio Elijah (1971), the Romeo and Juliet Symphony by Berlioz (1973) and Verdi’s “Manzoni” Requiem (1987).

In 1974 the Concert Choir, joined by the University Singers, was invited to present the world premier of Image of Man by the American composer Michael Colgrass, commissioned by the Spokane Symphony for the inaugural performance at the Spokane Opera House marking the opening of EXPO ’74.

The WSU Concert Choir made its New York debut on April 5, 1987 at Lincoln Center with the American Symphony Orchestra performing Mozart’s Mass in C Minor, K. 427, together with Five Mystical Songs by Vaughan Williams and Bruckner’s Psalm 150.  Ten days prior to their appearance in New York, the Choir performed the “Manzoni” Requiem of Giuseppe Verdi with the Spokane Symphony Orchestra at the Spokane Opera House.