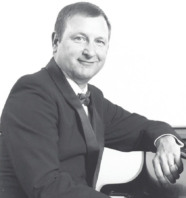 Dr. Gerald Berthiaume is Professor Emeritus of the School of Music at Washington State University where he taught from 1989 to 2016 and served as Director of the School of Music from 2003 to 2011. He formerly taught at Lamar University in Beaumont, Texas from 1978 to 1989. At WSU, he received many honors. He was selected in 2015 to give the Distinguished Faculty Address, the oldest award in the university. He has also received the College of Arts and Sciences Dean’s Award for Outstanding Achievement, the College of Liberal Arts Dean’s Award for Outstanding Achievement Across All Areas: Scholarship, Teaching, and Service, and the Honors College award as Outstanding Thesis Advisor. He served on numerous committees at WSU including the University Showcase Committee and was chair of the Honors College Council.

Dr. Gerald Berthiaume has adjudicated for the Washington State Music Teachers Association for the past 30 years. He has judged the MTNA State Competition for the Washington State Music Teachers Association (WSMTA) and Oregon State Music Teachers Association, and the Piano Pedagogy Conference International Competition in Atlanta, Georgia. He has performed at the MTNA National Conventions in Miami and Milwaukee, the College Music Society National Conventions in Chicago and Portland, the Society of Composers National Convention in Greensboro, North Carolina, the Hawaii International Conference on Arts and Humanities (3 times), and the New Music Festival in Munich, Germany. He is former chair of the WSMTA Education Board. He has performed, lectured, and given master classes at several WSMTA state conventions, and has chaired the 2001 WSMTA State Convention held at WSU. In 2015, he was named an MTNA Foundation Fellow at the national convention in Las Vegas. He holds the MTNA Permanent Professional Certificate.

Berthiaume has performed throughout the United States, in Germany, Saudi Arabia, Bahrain, Ukraine, and Vietnam. In 1993, he was a winner in the USIA “Artistic Ambassador Competition” at Stanford University and as a result, toured the Middle East presenting concerts at U.S. embassies and consulates. His recordings are available on iTunes and CD Baby and the following labels: Albany Records, Vienna Modern Masters, Advance Music, Arizona University Recordings, and the Washington State University label, where one can find his most recent CD on iTunes entitled “Struck by Lightning.”

Gerald and his wife, Mary, have a family of 3 children and 8 grandchildren. They enjoy spending time with family, traveling, and camping in the great outdoors.