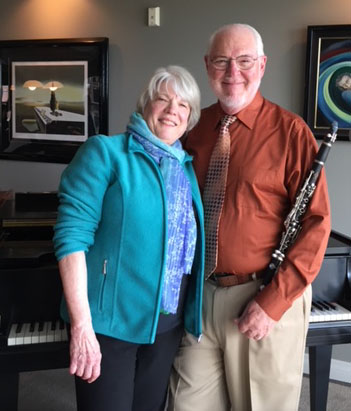 Dr. Schoepflin came to WSU in 1976 as Associate Professor of Music and Department Chair. At the end of 29 years of service he retired in 2005. During that time, he served as Music Department Chair as it was called then, later as the Music Program Coordinator, and finally as Director of the School 2000-2003. His primary teaching responsibility was the clarinet studio. Upon retirement in 2005 he was the last remaining original member of the Solstice Wind Quintet. His classroom teaching areas were Music History and Literature, Conducting, Woodwind Methods, and Chamber Music coaching. At one point he was interim conductor of the Wind Symphony and the WSU Symphony. From 1976 until 1987, he was Conductor/Music Director of the Washington Idaho Symphony.

He and his wife Nancy reside in Spokane. Their days are filled with domestic and international travel, visits to world cities to hear concerts, see operas and plays, and learn more about the world.