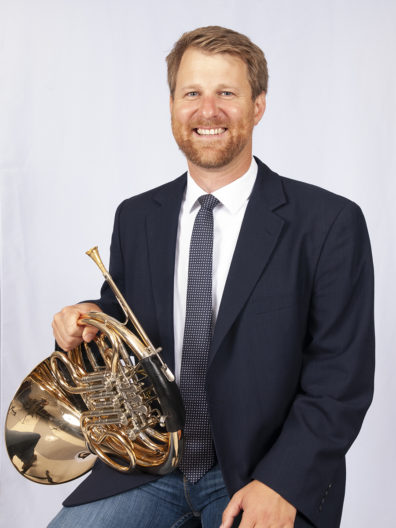 Dr. King has a wide-ranging playing and teaching career across the United States and around the world. Upon graduation from James Madison University, he took a position teaching middle and high school band in Alleghany County, Virginia. In addition to directing the middle school bands and assisting with the high school band program, King also maintained a large private horn studio. Before coming to WSU, Mr. King taught horn at Mississippi State University, and he served as a teaching assistant at the University of Alabama in horn and musicology. At WSU, Dr. King teaches horn lessons and horn studio, coordinates the Instrumental Music Education program, teaches Music Ed classes, is the academic advisor for Music Education students, and supervises student teachers and practicum students.

King currently performs in the Equinox Brass Quintet and the Solstice Wind Quintet, the faculty quintets at WSU. Dr. King is a founding member of the Pan-Pacific Ensemble, an ensemble dedicated to commissioning, performing, and recording the music of composers from around the Pacific Rim. The ensemble has performed across the United States and throughout Southeast Asia. The Pan Pacific Ensemble has commissioned ten new works for quintet and has recorded three albums on Albany Records: Feng, ironhorses, and Ambiguous Traces.

Dr. King has performed in China, Vietnam, Thailand, and around the United States. King has performed as a soloist with the Saigon Wind Ensemble, the Washington Idaho Symphony, the Washington State University Wind Ensemble, the Mississippi State Chorale, at the International Horn Symposium, various regional symposia, and at universities across the country.

Dr. King’s primary teachers are Abigail Pack and Charles “Skip” Snead. He also studied with John McGuire and has played in masterclasses with Eric Ruske and Richard Sebring. King is a member of Phi Kappa Lambda, the College Music Society, the National Society of Collegiate Scholars, the National Association for Music Education, and the International Horn Society.