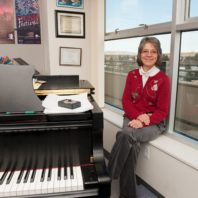 In addition to teaching and adjudicating throughout the state, Dr. Sloan served as President of the Association for Faculty Women (AFW) and as Executive Secretary of the Faculty Senate.  She received several awards including the Outstanding Teacher in the Honors College, the Teaching Award for Non-Tenure Track Faculty, The Sam Smith Leadership Award through the Association for Faculty Women, and in 2016 became the WSU Woman of the Year.

She was the first Non-Tenure Track faculty member to serve as a member of the Faculty Senate Executive Committee, to receive a teaching award, to be President of AFW, to receive the Sam Smith Leadership Award and to be Woman of the Year.

Dr Sloan holds a BA in Music from Manhattanville College, Purchase NY; an MA in Music Therapy from New York University, New York, NY; an MM in Vocal Performance from the University of Idaho, Moscow, ID and an Interdisciplinary Ph.D. from Washington State University researching Gender in Music.

Dr. Sloan retired in 2017 and now lives in Spokane with her husband Les.  Together they enjoy their children and grandchildren, traveling and spending time on the Pend Oreille River.